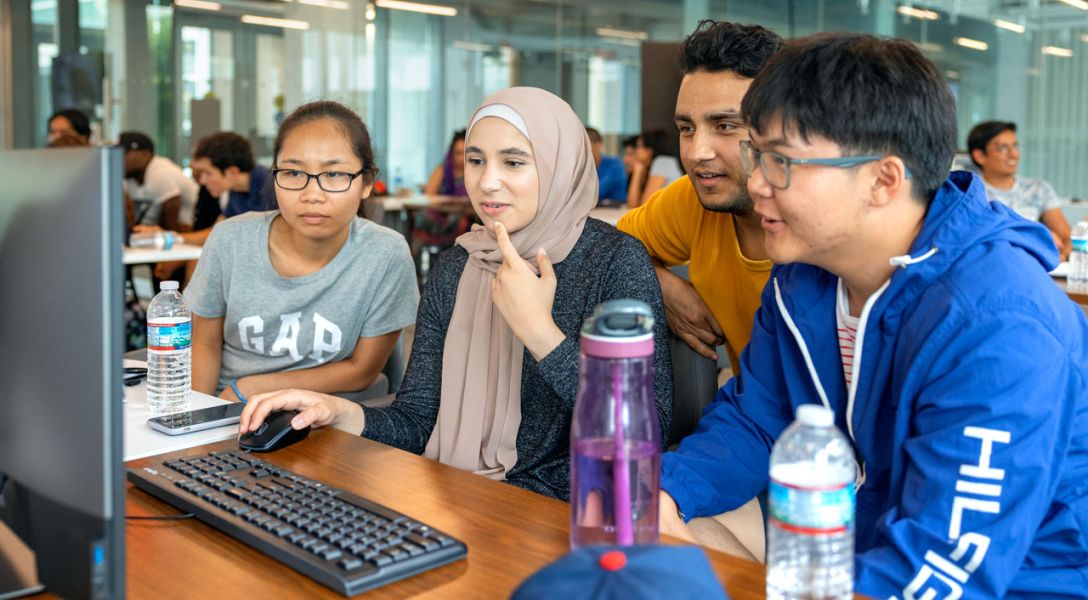 Hedaya Walter has her eyes on the skies. Her dream is to work for NASA, leveraging her undergraduate studies in electrical and computer engineering to deploy rovers and drones on uncharted planets.

Her week spent at Cornell’s SoNIC workshop – a crash course in robotics with nearly 30 other U.S. students, hosted by the Cornell Ann S. Bowers College of Computing and Information Science – helped clarify how to make that dream a reality.

“I feel like I’m reset for this coming year, my last year. I know what I need to do, and I feel more confident,” said Walter, a rising senior at Rutgers University who intends to pursue Ph.D. studies. “I come from a Hispanic family where both parents didn’t graduate college, and money is tight. Graduate school didn’t even seem like an option.”

It does now, she said: The SoNIC program provided insight about graduate school and how to apply.

“Not only do I feel like I have the skills,” she said, “but there’s also support.”

The weeklong SoNIC workshop, co-founded 12 years ago by Hakim Weatherspoon, professor of computer science at Cornell Bowers CIS, aims to inspire underrepresented students to pursue graduate studies in tech fields such as computing and information science. SoNIC is one of three summer programs hosted by Cornell Bowers CIS – CSMore and Designing Technology for Social Impact are the others – that have produced hundreds of alumni who have gone on to pursue Ph.D. studies, publish research at top conferences and land major research fellowships.

“SoNIC is an exhilarating illustration of Cornell Bowers CIS’ commitment to building a sustainable and meaningful pipeline for our traditionally marginalized students to pursue a graduate degree program and future career in the tech field,” said LeeAnn Roberts, director for the Cornell Bowers CIS’ Office of Diversity, Equity and Inclusion. “Because of this program, our participants are equipped with the resources, confidence and sense of belonging needed to create new models for advancing knowledge, addressing societal challenges and inspiring the next generation of diverse talent in technology.”

This year, SoNIC broadened its focus to include all three of Cornell Bowers CIS’ departments – computer science, information science, and statistics and data science – and tasked participating students with developing “smart canes,” assistive technology for the visually impaired, capable of sensing the environment and guiding users safely around obstacles.

Supplied with a basic cane, circuit boards and sensors, each student team spent the week learning robotics basics: the Robot Operating System (ROS), an open-source software suite for developers; the sense-plan-act paradigm critical to building an effective robot, and the importance of testing.

At the workshop’s culminating event on July 1, blindfolded students from each team put their smart canes to the test during a simulation in Upson Hall. Sensing obstacles – a stack of plastic bins or a cart pushed in the way – functional smart canes would alert users and redirect them right, left or forward by way of handle vibrations and audible tones. 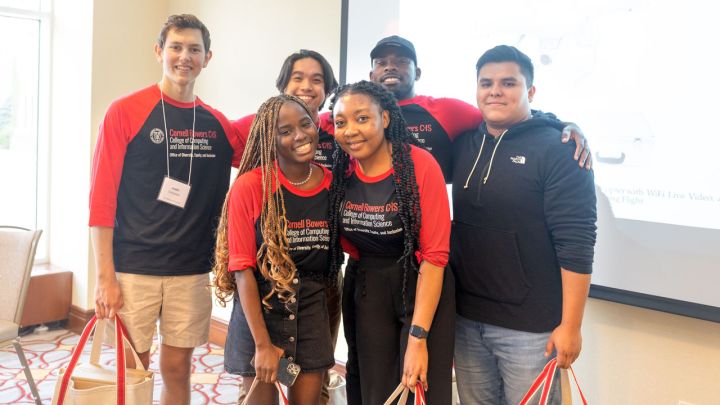 “Hopefully, the workshop was able to communicate that robotics is an inherently interdisciplinary field and no matter the background they come from, they always have a role to play,” said Tapomayukh “Tapo” Bhattacharjee, assistant professor of computer science, who led the weeklong workshop. “If this experience enables them to believe in themselves and pursue graduate studies, I would consider this workshop a huge success.”

For participating students – most of whom had little, if any, previous experience in robotics – SoNIC was about collaborative learning, seeing firsthand what graduate school entails, and sampling the diversity of research questions they might one day inform.

“I think a lot of us are focused on good grades and our GPAs,” said Ethar Hussein, a computer science major at the University of Illinois, Chicago. “But something I realized about this workshop is, yes, grades are important, but put down your pencil for a second and connect with people around you, see what they’re doing, and learn from them.”

For Jose Aguilar, a computer science major at the University of Oklahoma, his biggest takeaway was gaining a better knowledge of robotics theory and applying it to the smart cane device. He also appreciated the inside look at how research and graduate studies complement each other.

“I got to see so many different research projects and labs, and see how fields interconnect,” he said. “As a student planning my application to grad school, it’s good to know what’s out there, and who’s doing what and why.”

“At first,” said Walter, the aspiring NASA engineer, “I took on this program because I thought, ‘I need something to put on my resume. I love robotics, and it’d be nice if they told me about grad school.’ But this was way more than I expected, and I’m so glad I came.”

SoNIC is funded in part by the Hopper-Dean Foundation and the National Science Foundation.

By Louis DiPietro, is a writer for the Cornell Ann S. Bowers College of Computing and Information Science.