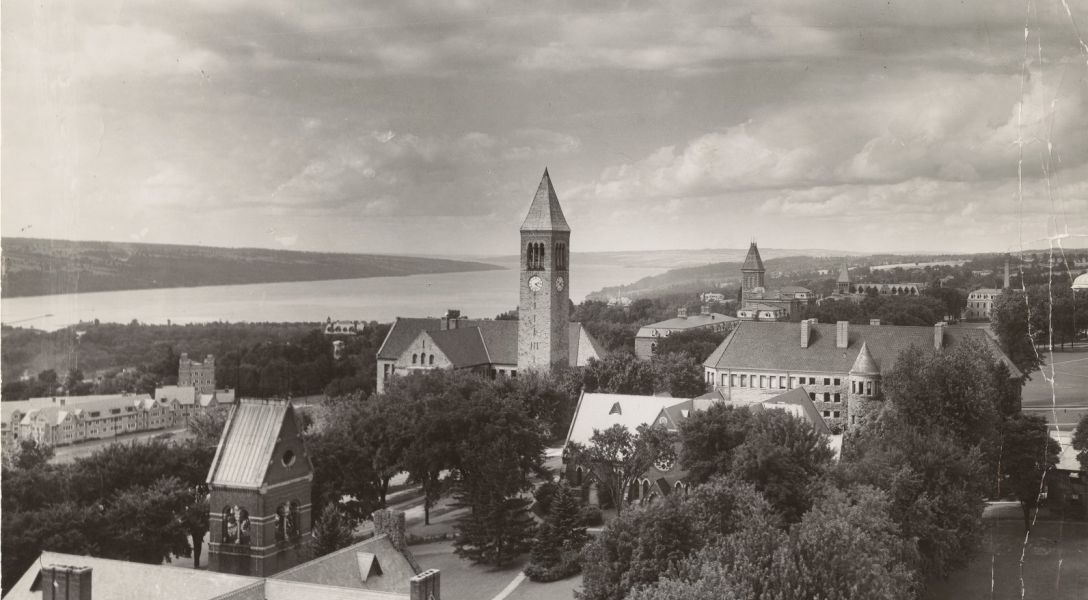 Before the Second World War, the discipline of statistics played only a minor role at Cornell. Exceptions were that Walter Willcox held the first professorship in statistics in the United States and Professor Edmund Ezra Day, who was to become our fifth University President, was president of the American Statistical Association a generation earlier. The developments of mathematical and applied statistics at Cornell occurred shortly after the Second World War.

Phillip McCarthy was recruited from Princeton to Cornell in 1948. Sample surveys had become a major tool as social science researchers sought to put their work on a firm empirical and theoretical base. However, at that time the current designs for most studies had major weaknesses, and modern sampling methods were needed. McCarthy then took a position on the faculty of the new School of Industrial and Labor Relations (ILR) at Cornell where he remained until 1988. In 1949, Isadore Blumen was recruited into the ILR social statistics group. McCarthy and Blumen played a major role in developing the Cornell Statistics Center, the first cross campus statistics organization.

The untimely death of Abraham Wald in an airplane crash in India in 1950 was a deep personal and professional loss for many in the Columbia statistics community. At the invitation of brother-in-law Isadore Blumen, Jacob Wolfowitz spent the summer of 1951 at Sheldrake on Cayuga Lake. During the visit, Wolfowitz developed associations with members of the Cornell mathematics faculty that led to an offer of a professorship. At Cornell, Wolfowitz’s great love of discussing ideas and problems resulted in collaboration with many mathematicians, probabilists, and students. Most outstanding of these students was Jack Kiefer who joined the Cornell mathematics faculty in 1952. Besides extending the frontiers opened up by Wald in the areas of decision theory and sequential analysis, Kiefer and Wolfowitz also either pioneered or made important early contributions in new fields such as stochastic approximation, many server queuing systems, and the design of experiments.

In 1970, Wolfowitz resigned from Cornell and took a position in mathematics at the University of Illinois.  Kiefer held a position at Cornell until 1979 when he retired and joined the faculty at the University of California at Berkeley. After the departure of Kiefer and Wolfowitz, the intellectual dominance in statistical decision theory in the Department of Mathematics was carried on by Larry Brown (a Kiefer student), Roger Farrell, and Juinn (Gene) Hwang.

While Kiefer and Wolfowitz joined the mathematics faculty in the early 1950s, two of Wolfowitz’s students from Columbia University, Robert Bechhofer and Lionel Weiss were brought in as key components of a vision to shape Industrial and Systems Engineering into a more sophisticated mathematically and statistically discipline.  Bechhofer and Weiss mentored generations of graduate students in theoretical and applied statistical research and provided dedicated and extremely effective courses in modern statistical methodologies to decades of Cornell students.

The traditional structure at Cornell for Statistics was decentralized, with groups established in the Colleges of Engineering, Arts, Industrial and Labor Relations, Agricultural and Life Sciences as well as a consulting service in Human Ecology. The advantage of Cornell’s traditional structure was that it forced statisticians to be close to their areas of application and prevented an insularity that may result from being concentrated in one department.   In June 2001, Provost Biddy Martin asked a committee of deans to reconsider the organization and administration of the Department of Statistical Sciences (DSS).  The charge was to devise ways to enhance the capacity of the DSS to serve as a coordinating mechanism and a catalyst across multiple colleges, i.e., to move it from a ‘‘virtual’’ to a ‘‘real’’ department in significant ways.

In 2005, DSS became a department in Cornell’s new Faculty of Computing and Information Science (CIS). The CIS partnership opened potential new avenues for exploring future work with the Departments of Computer Science and Information Science. In 2019, DSS expanded to become the Department of Statistics and Data Science (SDS), a multi-college partnership among CIS, the College of Agriculture and Life Science (CALS), and the Industrial Labor Relations (ILR) School.