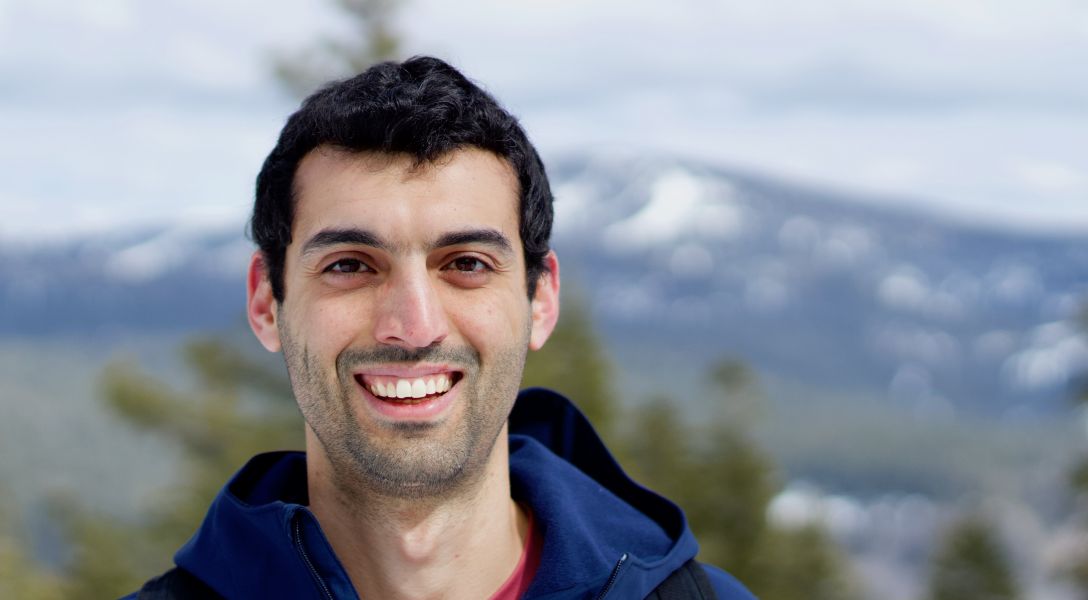 Ahmed El Alaoui had a math teacher in middle school who told him that he should just stop coming to her class and find something else to do, since math class seemed to be useless to him. His performance in the class had been awful and she was convinced that mathematics would certainly not be part of El Alaoui’s future. Fortunately, El Alaoui ignored the advice and now he has joined the faculty of Cornell’s Department of Statistics and Data Science as an assistant professor, where he focuses his research on high-dimensional phenomena in statistics and probability theory, statistical physics, algorithms, and problems where these areas meet.

El Alaoui grew up in Casablanca, Morocco, where his mother was a high school natural sciences teacher and his father was an engineer with a background in signal processing who worked for the Moroccan National Railroad. Later, in high school, El Alaoui developed a strong interest in both basic physics and mathematics. “I found that pure math was the most natural and the most comfortable area of study for me,” says El Alaoui.

He pursued further study in math at the Ecole Polytechnique in Paris, where he earned a B.S. and an M.S. in applied mathematics. During his undergraduate years El Alaoui took classes in a variety of subjects that he found interesting. He also had several internships, including one working for a bank. “When it came time to choose a major I had to write a statement of purpose to justify my choice,” says El Alaoui. “So I wrote that every time I tried to do something else or to deviate away from math, I did not like it. I said that I had exhausted my choices and in the end mathematics was the only thing I really like doing.”

While El Alaoui was earning his Master’s degree in Paris, his advisor helped arrange a meeting in the Café le Piquet with Professor Michael I. Jordan from the University of California, Berkeley. Jordan was on sabbatical and spending the year in Paris. “I had applied to Berkeley,” says El Alaoui, “and I guess I didn’t realize it, but that meeting in the café was my interview.” The interview must have gone well because El Alaoui joined Jordan’s group at Berkeley the following fall.

At Berkeley El Alaoui earned his Ph.D. from the Department of Electrical Engineering and Computer Sciences (EECS). His focus changed gradually, starting with a broad interest in Machine Learning, computer science, and artificial intelligence and shifting to a more theoretical approach to statistics, probability theory, and optimization theory. From Berkeley, El Alaoui went to Stanford where he was a post-doctoral researcher with Andrea Montanari.

El Alaoui used his post-doctoral term to explore the interface between probability theory and statistical physics. “I wanted to understand this interface better,” says El Alaoui, “and Andrea is one of the founders and world leaders of this area of study. There are not a lot of people who know this stuff, so for me it was the natural next step to take.”

El Alaoui jokes that his Ph.D. advisor and his Post-doc advisor more or less switched roles. Michael Jordan at Berkeley had a large lab group with many areas of focus and a necessarily hierarchical structure to keep everything organized and moving forward. Ph.D. students had to be very independent and autonomous. Montanari, on the other hand, had a group of just five people when El Alaoui was there. As a consequence, he got to spend a lot of time working side-by-side with Montanari. El Alaoui says with a smile, “the joke was that I did five years of post-docs and then after that I did two years of Ph.D.”

The decision to join the faculty at Cornell was not a difficult one for El Alaoui. He came to campus to interview and immediately had the feeling that it was simply a nice place to be. “The people in the department were all great,” says El Alaoui. “It felt a lot like Berkeley. It was clear that people had good ideas here and were open to collaboration. In contrast to so many other places, it did not feel siloed.”

El Alaoui says of his research, “I am interested in questions that happen in high dimensions. A lot of the questions that people are trying to answer in statistics and in applied sciences involve many decision variables. People are coming up with algorithms to solve some of these problems and these algorithms need to be very fast and reliable. I am working to develop the theory that goes behind these algorithms.” El Alaoui says that all algorithms contain inherent trade-offs between speed and accuracy. He would like to account for these trade-offs theoretically. “My ultimate hope is that five or ten years from now we will have a complete theory that quantifies these trade-offs.”

In the spring semester of 2021 El Alaoui will be teaching Topics in High-dimensional Inference, a research topic class rooted in many of the questions underlying his work. It will draw on ideas from computer science, statistics, probability theory, mathematics, and operations research.

When he is not thinking about high-dimension phenomena, El Alaoui likes to go for long rides on his road bike.