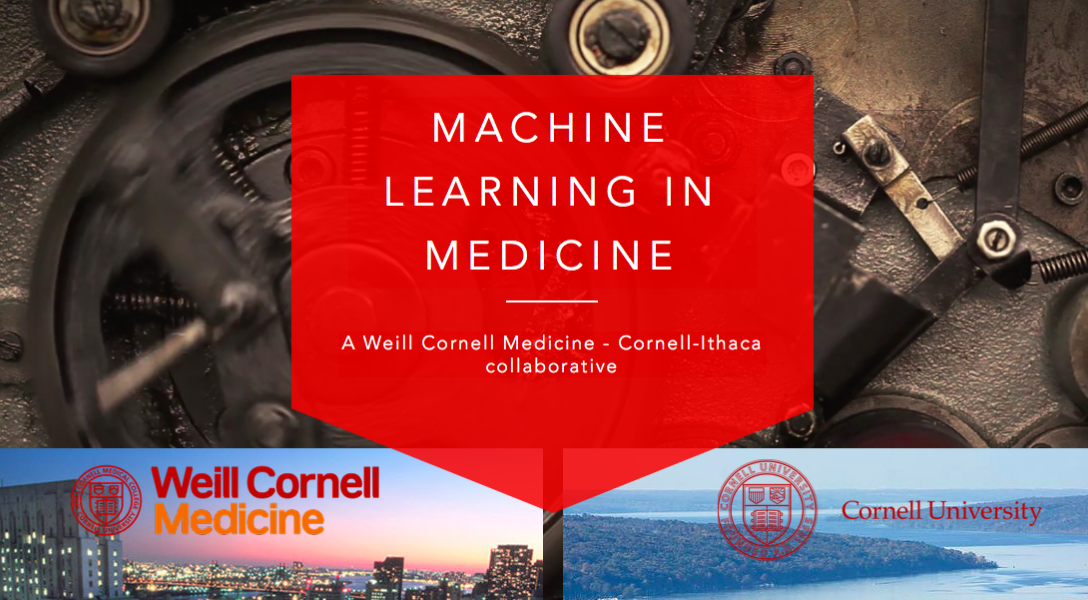 The excitement around machine learning in medicine has permeated the world of clinicians and researchers alike. While artificial intelligence is unlikely to replace medical professionals in the near future, a new era of machine learning applications to medicine is poised to revolutionize healthcare. The intercampus symposium Bridging the Divide: Machine Learning in Medicine, held at Cornell University’s Ithaca campus September 27 and 28, 2018, at the Cornell Lab of Ornithology, brought together researchers and clinicians from Cornell University and Weill Cornell Medicine to discuss recent work and initiate collaborations in the field of machine learning in medicine. The two-day event featured 28 talks about the cutting-edge machine learning projects currently underway at Cornell University and Weill Cornell Medicine, a poster session and reception to highlight the work of trainees, and working group discussions to initiate collaborative projects between the two campuses.

Amy Kuceyeski was part of the faculty team from both campuses that helped organize the event.

“When I came to Cornell’s Ithaca campus after seven years at Weill, it was apparent to me the potential for fruitful collaborations between academics at Cornell-Ithaca and clinicians and researchers at Weill Cornell in the area of machine learning in healthcare. The interest we saw at the symposium, with over 100 in-person attendees and 60 remote attendees, was just the beginning,” said Dr. Kuceyeski, an assistant professor of Mathematics and Neuroscience in Radiology at Weill Cornell and an adjunct professor in Biological Statistics and Computational Biology at Cornell’s Ithaca campus .

The organizing team also included Mert Sabuncu, an assistant professor of Electrical and Computer Engineering and Biomedical Engineering, Martin T. Wells, a professor and chair of the departments of Statistical Science and Biological Statistics and Computational Biology, and James K. Min, a professor of Medicine and Radiology and the director of the Dalio Institute for Cardiovascular Imaging at Weill Cornell Medicine.

The event’s keynote speaker, Dorin Comaniciu, PhD, Vice President for Artificial Intelligence at Siemens Healthineers, presented a compelling talk about the applications of artificial intelligence technologies in healthcare that target three key outcomes: patient experience, patient outcome, and quality of care. A glimpse into state-of-the-art technologies currently in development at Siemens presented an inspirational outlook for machine learning in medicine. A key example of this is The Digital Twin project, in which a virtual representation of a given individual is used to understand and make predictions about the physical counterpart. The idea is that the digital representation would receive lifelong personalized physiological information from every medical exam, scan, and test completed by the individual. Artificial intelligence technologies applied to this personalized representation based on data collected across all digital twins would subsequently enable person-centric prevention of medical illness and enable a holistic approach to treatment.

The evening of the first day of the symposium concluded in a poster session with 18 trainees from both campuses presenting topics ranging from automated diagnosis of peripheral edema to neural network-based segmentation of 3D in vivo multiphoton images of cortical vasculature. Prizes were awarded to the top poster presenters: first prize was awarded to Adrian Dalca (Cornell-Ithaca, Electrical and Computer Engineering) for his development of a fast algorithm for automated brain MRI registration, second prize was awarded to Casey Cazer (Cornell-Ithaca, Veterinary Medicine) for her work using association rule mining to identify multidrug resistance patterns and third prize was awarded to Pegah Kosravi (Weill Cornell Medicine, Bioinformatics) for her work on deep neural network classification of pathology images.

Support for the Intercampus Machine Learning Symposium came from the Office of the Vice Provost for Academic Integration led by Gary Koretzky, MD, PhD. Dr. Koretzky, the former vice dean for research and dean of the graduate school at Weill Cornell, is currently focused on developing programs to enrich scholarship at Cornell by identifying opportunities and reducing barriers for cross campus synergies.

“I was thrilled with the energy apparent at the Machine Learning Symposium. It was clear that investigators from New York City were learning about methods and approaches spearheaded by colleagues in Ithaca and that Ithaca faculty were already envisioning applications of their work to the clinical setting,” Dr. Koretzky said. “This symposium was precisely what we hoped for when we published the request for applications for intercampus symposia and serves as a model for future such events.”

The organizing team plans to continue the collaborations kindled at the symposium by hosting a wiki on their website that is accessible to faculty and trainees from both campuses and will list proposals for projects looking for collaborators, grant opportunities, resources and events within the field of quantitative medicine.