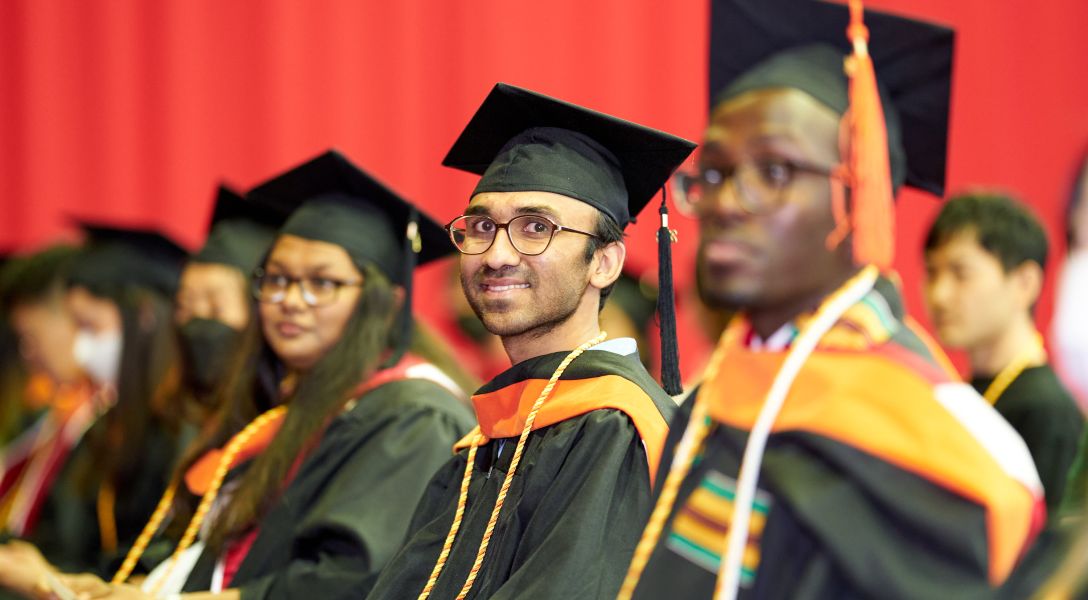 Honoring the largest graduating class in its history, the Cornell Ann S. Bowers College of Computing and Information Science handed out nearly 1,300 degrees to the Class of 2022 during separate recognition ceremonies for each of its three departments on Friday, May 27, in Barton Hall.

The first in-person department ceremonies hosted by Cornell Bowers CIS since 2019, the events recognized and celebrated graduates across computer science, information science, and statistics and data science, whose resilience, grit, and adaptability girded them through a challenging college journey fundamentally transformed by Covid.

“As you reflect, I hope you remember the positives: the friendships during study sessions in Gates, or, for your generation, on Zoom; the lessons you learned from assignments, and the faculty, who are some of the best in their fields and who are deeply committed to your success,” Kavita Bala, dean of Cornell Bowers CIS, told graduates.

“We are living in a time of incredible opportunity and deep challenges,” she said. “This is the best time to be in the computing and information disciplines because there is just so much to do, and you can have a tremendous impact with the degrees you’ve just earned here.”

Bala pointed to the boldness and audacity that led to the creation of Cornell Bowers CIS in 1999, when pioneers across Cornell University’s computer science, information science, and statistics and data science departments foresaw an advancing digital age best met collectively. The “Cornell CIS model,” as it is now referred, has since been emulated at universities around the world.

At Cornell, that vision put into action 23 years ago has proved prescient: student enrollment in Bowers CIS has grown six-fold just in the last decade, and today, 76% of all Cornell undergraduates take at least one Bowers CIS class. The college’s growth and standing produced another first at Cornell Commencement on Saturday, May 28 – graduating students from the college entered the ceremony in Schoellkopf Field under the Cornell Bowers CIS banner.

“Whether heading into industry, starting your own company, or staying in academia, I encourage you to embody our college’s bold legacy to have a positive impact on your field and the world itself,” Bala said. 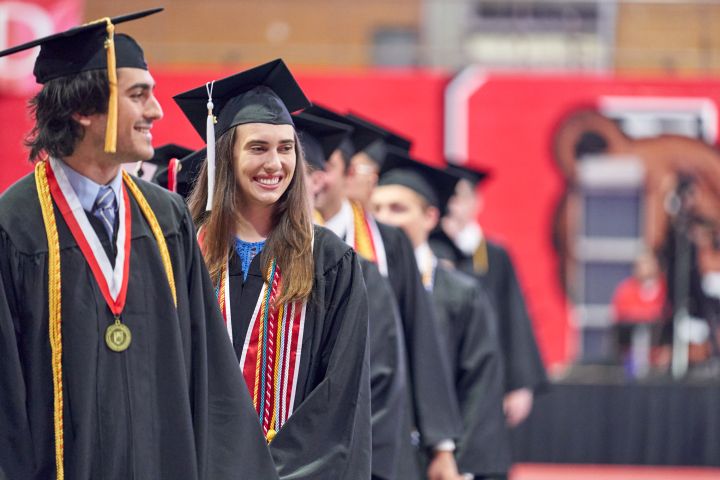 “At Cornell, you’ve been challenged,” Martin Wells, chair of statistics and data science, said. “You’ve completed a rigorous program that’s been very demanding and under extremely exceptional circumstances. You could not have succeeded in this accomplishment without talent, focus, and perseverance.”

To succeed today, not only do statistics and data science students need to be experts in a variety of related fields – like statistical analysis, mathematics, computer science, and optimization – they must also become experts in other varied disciplines, like biology, law, economics, or climate science, Wells said.

“The work of our graduating students reflects the diversity of our subject and its interdisciplinary nature,” he said.

Wells reminded graduates that commencement, by definition, is a beginning.

“As ambassadors of statistical science, you will influence how the new data-driven economy and society will change,” Wells said, “and you’ll have a great hand in its future.”

“Getting a degree from our program is challenging even in normal times, and with Covid, it was anything but normal,” Eva Tardos, chair of computer science, told the Class of 2022 during the computer science recognition ceremony.

In what she called a slight change in the program, Tardos specifically recognized three invaluable student organizations and their student leaders: the Association of Computer Science Undergrads (ACSU), the Women in Computing at Cornell (WICC), and Underrepresented Minorities in Computing (URMC).

“Each of these groups has done essential work to help organize our communities and help students succeed,” said Tardos, who expressed appreciation on behalf of computer science faculty and students.

“After the past two years of the pandemic, we realized two things,” said David Williamson, chair of information science, in his remarks to the Information Science Class of 2022. “First, your accomplishment in graduating has taken more work and effort than anyone could have anticipated when you started. … Second, we realized it’s no small thing that we can gather here today to celebrate your accomplishments. We took these big celebrations for granted. Today, we do not.”

Kyle Harms, lecturer in information science, was selected by graduates to give the keynote address. In delivering what he called the graduates’ final lecture, Harms – an instructor in web design and development – said each graduate’s journey is an iterative process, much like any web-design project.

“Each iteration wasn’t really about improving the website, it was about you. It was watching you learn something you weren’t sure you could do, and then succeeding,” Harms said. “It’s the journey you took here that is your significant accomplishment, not just your diploma.”

In several moments throughout his speech, Harms paused to allow graduates to reflect on their successes, the “version zero” of themselves as new Cornell students, the fears they had, and what graduates learned in their time here.

“We’re in such a rush to get things done, we forget to pause and reflect on the significance of accomplishments,” even seemingly-small ones, he said. “All of these little accomplishments aren’t as easy to measure as grades and yet they are likely the most significant of your accomplishments.”