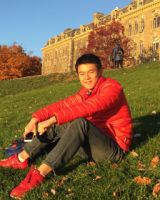 Xin Bing is the Ph.D. candidate in the Department of Statistics and Data Science, advised jointly by Florentina Bunea and Marten Wegkamp. Before joining to Cornell, he received a BS in Mathematics in 2013 and an MS in Mathematics and Financial Engineering in 2016 from Shandong University, China. He also received an MS in Statistics in 2016 from University of Washington, Seattle.

His research interest lies in developing new methodology with theoretical guarantees to tackle modern statistical learning and high-dimensional statistical problems, such as dimension reduction, clustering and inference. He is also interested in the application of developed methods to various fields, such as genetics, social science and neuroscience.